This last week’s episode of Doctor Who left me surprisingly cold.

This is partly due to my having just watched John Woo’s Red Cliff, the best war epic I’ve ever seen: casting, pacing, scheming, cinematography, dialogue (it helps that I understand Chinese, naturally), acting (oh the ACTING – Takeshi Kaneshiro and Tony Leung were born to cast knowing looks at one another while having stoic, brilliantly understated conversations), martial arts and rank-and-file action…  No other movie by no other director could mesh superheroic martial arts feats with a hellish, pitched battle without passing into the realm of farce.  As movies go, there are few better ways to spend four and a half hours, and I would watch thirty-six hours more if John Woo were to adapt, with these actors, the rest of the 100 chapter novel Romance of the Three Kingdoms upon 10 chapters of which the film is based.

Juxtaposition of some sort is at fault for my poor reception of this week’s Doctor Who episode, anyway – if not its juxtaposition with Red Cliff, then its juxtaposition with the previous two episodes of the new season, The 11th Hour and The Beast Below, both by Stephen Moffat.  This is the first episode of the new season penned by a writer other than Moffat, and it feels like a flashback to the RTD era.  This is not really the fault of Mark Gatiss, the scribe in question, though he would have done better by writing a location other than a featureless bunker, involving Churchill as an active character rather than a passive bystander, or, I dunno, not allowing the main characters to defuse the bomb with the power of love.  Mostly, the flashback feeling is the fault of the Daleks.

This hurts me to say, but the Daleks deserve to rest.  They appeared so frequently in the RTD era that they became the show’s flagship antagonist, and this weakened them.  The first Dalek (introduced in the episode Dalek!, sensibly enough) shown in the new series could have easily wiped out all of Earth.  Subsequent Daleks never recaptured this initial menace, though they occasionally approached it, in the last two episodes of the first season, or in the hilarious confrontation between the Cybermen and the Cult of Skaro.  By the time the immense Dalek fleet appeared at the end of Season 4, the audience was chilled, but not terrified – an equally-sized band of Sontarans would have been as much of a threat.

Compare this with the Borg , the fiercest enemies bar none in Star Trek: The Next Generation and Star Trek: Deep Space 9.  The Borg hand the crew their greatest military defeats, they break Picard – think about that for a second – and though they are always thwarted in the end, they remain so terrifying throughout the show that when the Enterprise crew finds a single, abandoned Borg on a distant planet, the immediate reaction is “kill it now, before it does… something!”  The threat does not need to be concrete to terrify our heroes; that it is Borg is sufficient.

Star Trek’s writers built this menace by omission.  The Borg had to be defeated at the end of every episode or two-parter in which they appeared – like the Daleks – and .  TNG’s writers realized this quite early on, and avoided using the Borg as much as possible, to maximize their impact.  The Borg appear in, 7 episodes of TNG, and zero episodes of DS9 – 7 hours total out of a two-series run of about 300 hours – and their shadows are more long and terrifying for all this.

Meanwhile, the Daleks, like movie elves, are over-exposed.  Each season of the BBC Wales Doctor Who has featured at least two Dalek episodes, one of which is always a two-parter: fully a quarter of Doctor Who screen time since the reboot six years ago has been Dalek-focused, not counting the 2009 specials.  12 of 48 episodes have been Doctor vs. Daleks, and the Daleks have lost every time.  It’s hard to believe in their threat any more.  They need to rest and recharge.  Hopefully the rest of this season will provide them with much-needed R&R, so they can return to exterminating in the fullness of time.

2 Responses to “Juxtaposition of the Daleks”

I write books and games—most notably the Craft Sequence, tales of wizards in pinstriped suits and gods with shareholders’ committees. Campbell Award nominee 2013, 2014. 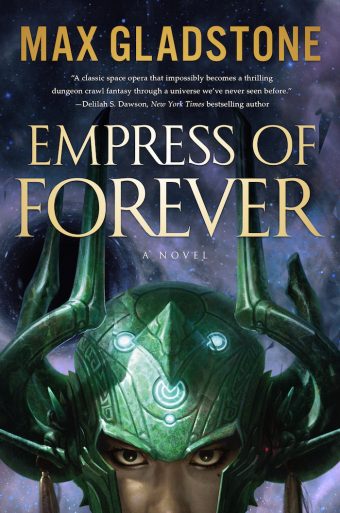 Coming June 18! A wildly successful innovator to rival Steve Jobs or Elon Musk, Vivian Liao is prone to radical thinking, quick decision-making, and reckless action. On the eve of her greatest achievement, she tries to outrun people who are trying to steal her success. In the chilly darkness of a Boston server farm, Viv […]